Charles
I am a potter, farmer and episcopal priest who lives in the woods of New Hampshire with a black lab, some chickens and some bees. As a potter I work in stoneware with raku, oxidation and reduction firing processes. I love to love my friends and take friendship very seriously. 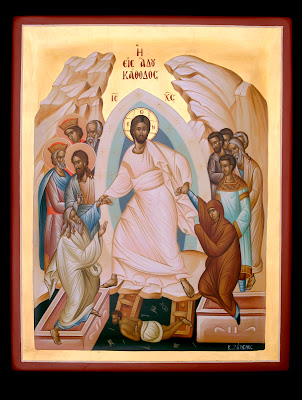 Egg tempera on wood, Greece, 2000, the Anastasis Icon from 7th century Chora Monastery in what is now Istanbul.


Jesus is raised from the dead, emerging from the almond-shaped symbol of both the female reproductive organ and the intersecting circles of heaven and earth - the "mandola- from which we get the word "almond"; Jesus arrives in power to crush lies and manipulation forever and establish a reign of truth. He arrives from the grave with the female hips of a life-bearer, accentuated by a waist band and the gyrating legs of a strong-man pulling Adam and Eve from their helplessness by loose wrists. Satan is at his feet amid the coffin and the implements of Jesus' betrayal and death in darkness of lies and "obscura" which is the dark night of sin's confusion. On Jesus' left are John the Baptist, King Solomon, King David and Moses. On Jesus' left are Abel (the first innocent to die at the hand of a loved-one, Cain, who killed so that he could have what he wanted, when he wanted it). Behind Abel are Peter, John and James and an unidentified disciple.
Posted by Charles at 9:42 PM